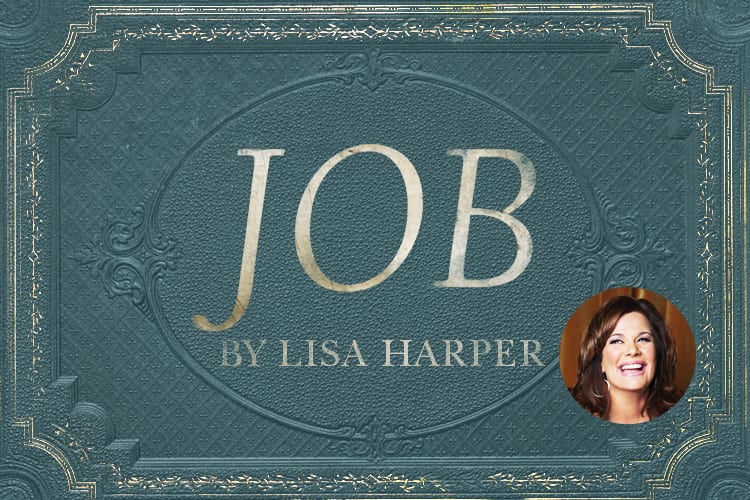 Today we’re sharing an excerpt from Lisa Harper’s new study Job. Order your copy or see a free sample today at LifeWay.com/Job. You can also pick up a copy at your local LifeWay Store. For July only, receive a Job journal for just $5 with the purchase a Job Bible study book. We’ve also included some fun, free downloads at the end of this post to celebrate this new study!

For me, the most difficult concept in Job 2, if not the entire book, is the fact that God allows Satan to further afflict Job. Good night, the poor fellow has already presided over the funerals of all ten of his children and most of his team of employees, plus he’s faced foreclosure on his estate. It’s almost impossible to imagine the depth of his grief in light of those huge, horrific losses. Now that pain is compounded by adding terribly painful, infected, head-to-toe, open sores to his inventory of agony.

God’s sovereignty over absolutely everything in the world, including allowing the devil to devastate Job beyond what seems humanly bearable, begs the age-old question we talked about in the first video teaching session: If God is truly good, why does He allow such bad things to happen to us? I mean, how in the world could a compassionate Creator hand one of His beloved created beings over to that wicked dragon—the very same snake the apostle John said comes only to steal from us, kill us, and destroy us (John 10:10)? I don’t begin to have the wisdom to conclusively answer the question of why God allows suffering. However, over the years, I have constructed an internal theological framework by which to consider God’s allowance of suffering so that I don’t lose my hope in the ditch of despair, sully my soul in the mud of moralism, trade my peace for the anguish of over-analysis, or harden my heart in the cement of cynicism.

Here’s the deal: Despite how incredibly harsh pain appears from our perspectives, God only gives Satan enough rope to hang himself. It’s never enough to drag us away from God’s presence.

At the end of my freshman year in high school, my stepfather gave me a choice; he said if I chose to stay at Lake Brantley High School, I would no longer be allowed to participate in extracurricular activities such as student government, social clubs, or sports. He was the principal at the middle school next door, and he wanted me to ride home with him as soon as he got off work. He was not willing to wait around for me to be finished with track practice or a Fellowship of Christian Athletes meeting. And he flatly refused to drive twenty-five miles round trip after hours to pick me up from anything sports- or social-related.

However, he bargained, if I agreed to transfer to Seminole High School, the secondary school in our town, I could participate in whatever clubs or sports I wanted to because it was close enough for me to ride my bike to and from activities. Mom tried to change his mind after we met with a much less-than-hospitable staff member at Seminole, whose grammar was even more atrocious than his lack of civility. She became concerned about the school’s lackluster academic standards, not to mention the rampant drug use, racial tension, and campus violence that was often reported in the local news. Despite the fact that mom graduated from Seminole High School and had met my stepfather, Dad Angel, there thirty years earlier, her concern for my safety and college preparation trumped any nostalgic thoughts of me attending her alma mater.

But Dad Angel wouldn’t budge. So in August of 1978, I left all my friends and a sparkling clean, recently built school with a bevy of amenities to attend a very old school with zero modern amenities and a constant police presence. The first few days were definitely dicey. I was chased more than once by a gang leader who wanted to rough me up to bolster his reputation as the number one bully. A girl hurled an expletive at me and threatened to beat me up because her boyfriend gave me directions to the driver’s ed class. And my preppy clothes made me a laughingstock at the lockers between classes. But soon enough, I befriended the bully after his sister told him that she and I were friends in elementary school. I learned to avoid boys who were attached to mean, possessive girls who were prone to wearing tube tops in public. And I exchanged khakis and top-siders for Levi’s® and flip-flops.

More importantly, I learned to love people who didn’t look like me or live in my neighborhood. I learned that skin color, zip codes, and test scores were petty details and absolutely useless qualifiers for real relationships. I learned to make do with handme-down uniforms, generously cracked tennis courts, sagging nets, and a gym without air-conditioning in the intense heat and sticky humidity of Central Florida. I learned how to ask better questions in class and check out more books from the library. I learned how to engage through dialogue instead of distancing through diatribe. I learned how to gladly share microscopes and dissecting equipment in an antiquated laboratory under the guidance of an awesome anatomy teacher. I learned how to be a team player and cheer even louder from the bench than I did on the court.

Seminole High School is where I learned that entitlement is the archenemy of creativity, passion, and joy. It’s where I learned that building something by the sweat of your brow is a lot more rewarding than having it handed to you. It’s where I learned to lead Bible studies with my best friend Cindy. It’s where we first studied the theme of adoption in the Bible. It’s where we made a solemn promise after a Fellowship of Christian Athletes meeting that we’d adopt hard-to-place kids when we grew up—which means it’s also where I unwittingly began the journey of becoming Missy’s mama, thirty years before her first mama died from AIDS in a small village in Haiti.

The greatest theological minds in the history of Christendom haven’t been able to conclusively answer the question of why our Redeemer allows suffering to happen, so you’d better bet I can’t. But I do have enough life experience to believe that if we trust that our God is good and He does good—even when life is really bad—hardship won’t make us bitter; it will actually make us better. It won’t break us; it will make us. Of course, changing high schools can only be defined as a “hardship” in the narcissistic milieu of adolescence. It would barely register as a blip on the radar of real pain. But the truism of God’s absolute goodness has followed me all of my days, including times of much greater grief—my parents’ acrimonious divorce, sexual abuse as a child, rape in college, multiple abusive and toxic relationships as a young adult, losing both of my fathers, a heartbreaking failed adoption at the eleventh hour, and many other seasons of suffering.

Now that I’m in my fifties, it’s safe to say I’ve lived more life than I have life left to live. And when I look back over my entire story thus far, I can honestly tell you I have never seen God’s back. Mind you, there are still lots of things I don’t understand, and there have been losses I almost couldn’t bear. But through it all, I have never experienced His absence. I don’t know why God allows His children to suffer, but I do know that He always makes Himself accessible to us when we ache.

Want to learn more about this new study? Watch the short video below or view a free sample and teaching video clips at LifeWay.com/Job.

And here are some fun wallpapers for your computer and phone! Click the images or links below to download! 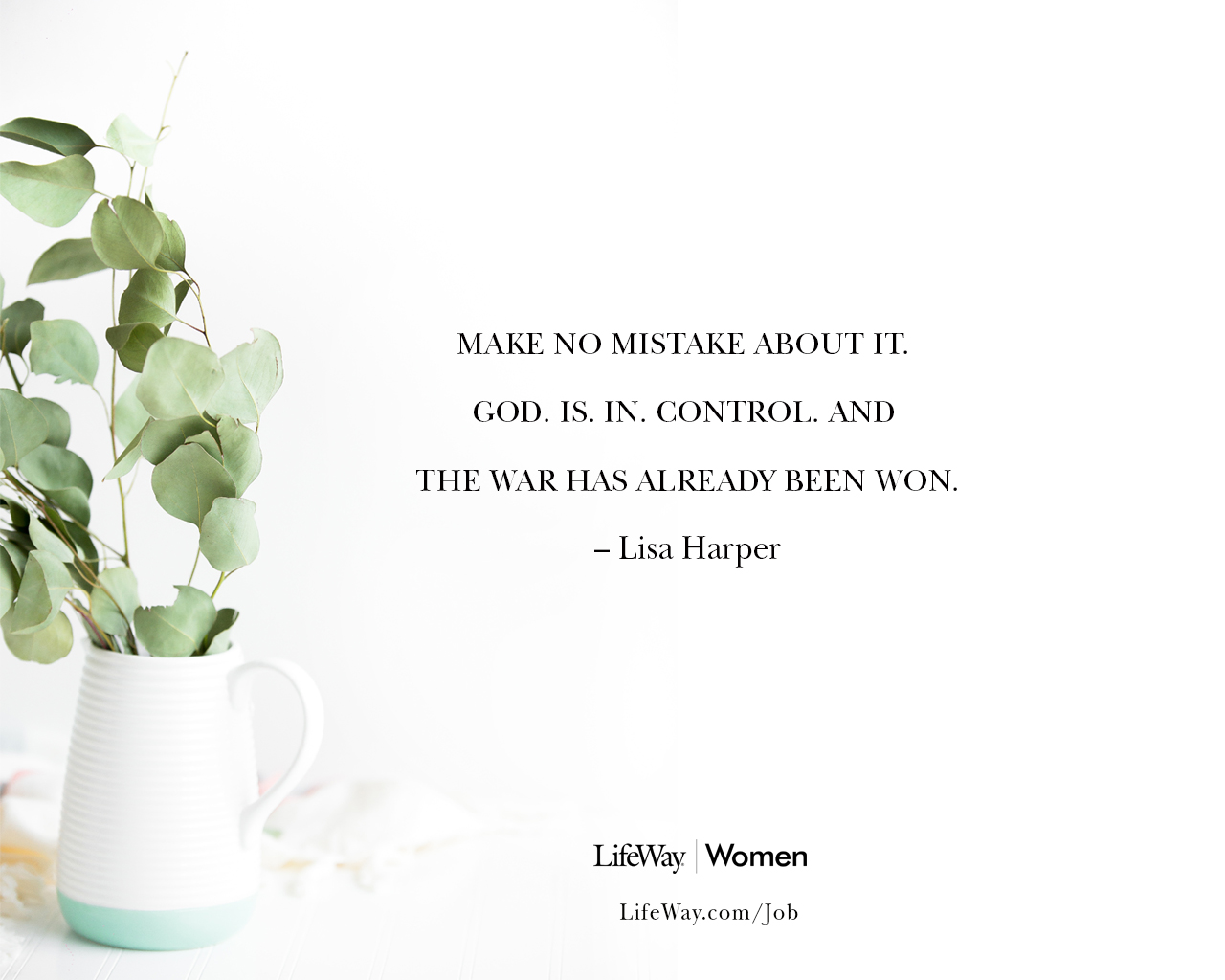 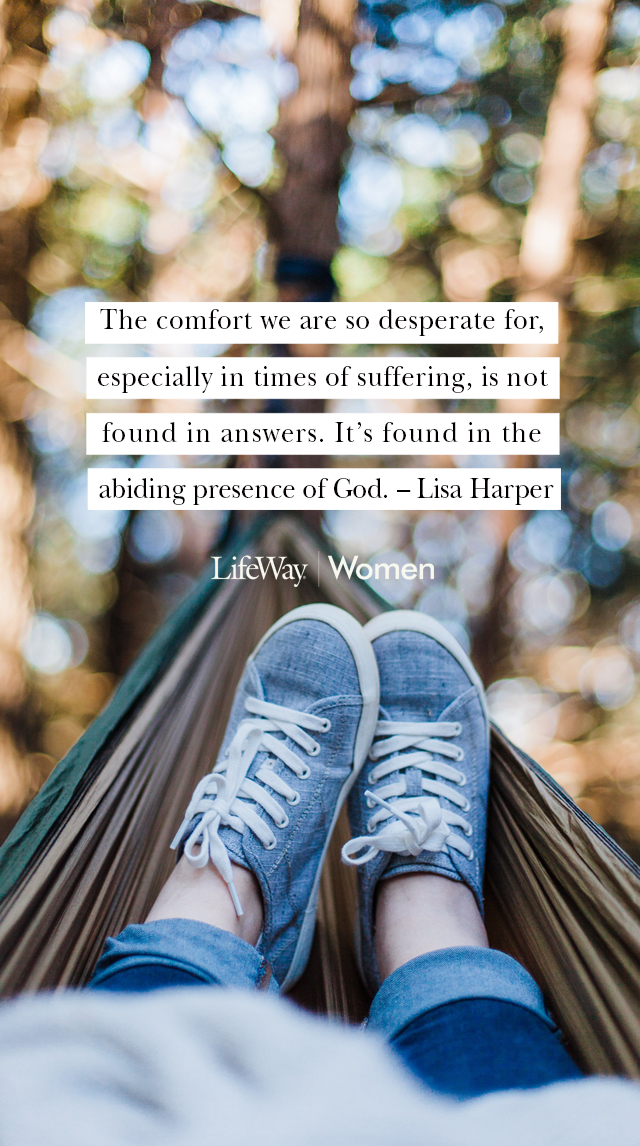 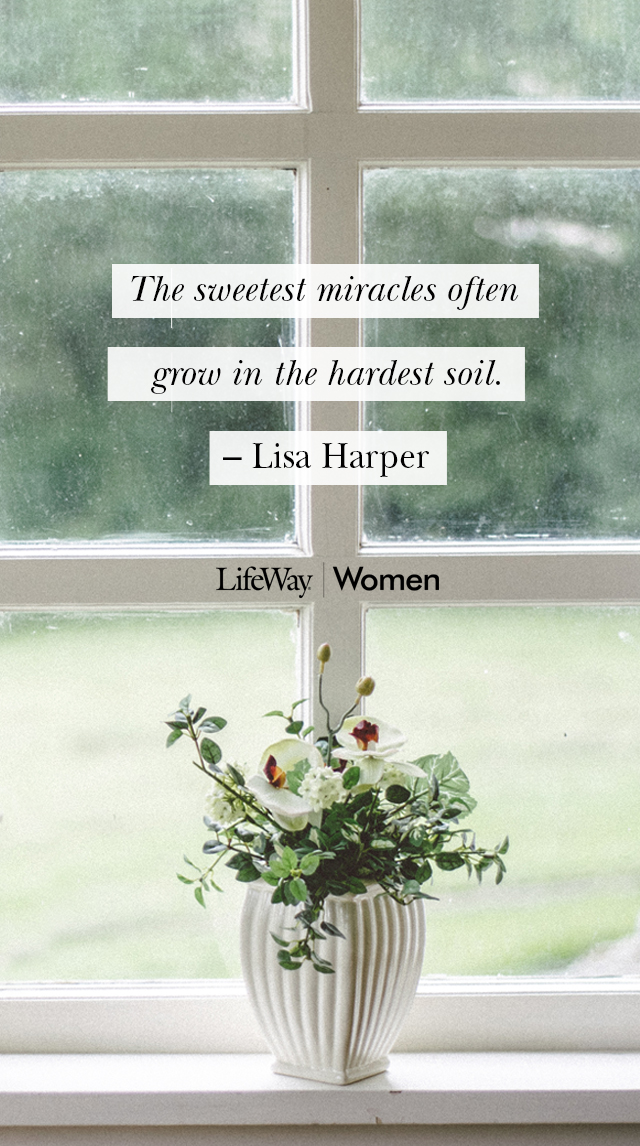 I have seen a mention of the videos being free to watch until towards the end of March 2019. How can I find the videos? I tried to send in an email to ask for help but I have not received any answers.

Hi, Susan! You can find the videos here until March 31st: https://onlinestudy.smallgroup.com/v/JobOBS

Hi, I have just started the Bible study class at my church . Was very excited but learned that it does not have caption capitibilities and uo m severely hard of hearing and can only participate with caption. Please keep this in mind with all future Bible studies as their is a huge number of people in the deaf community that would live to have these studies to increase their walk with our savior. Thank you

Hi Ellen! Thank you so much for your feedback. We are actively working on making CC available on digital videos for all of our studies moving forward, but I am sorry to say that is not ready yet. It is coming, though! In the meantime, if you need a list of leader kits that have subtitles, I would be glad to send you those options.

I am interested in online study of Job. Add my email so I can know when it starts.

Jackie, This is not an online study at this time. You can start whenever you’d like! If you want to make sure not to miss our next online study, you can subscribe to our newsletter here. We always put the online studies there so you can be sure to see what’s coming up!

I look forward to sharing this Bible Study with friends and family . I love her statement the sweetest miracles often grow in the hardest soil thank you Lisa for sharing your journey.

I love that Lisa finds joy in ways that it’s hard for me to find it in! Her last book was SO GOOD, I listened to it twice!

This study sounds wonderful! I’m hoping to share it with friends who are experiencing difficult, painful and trying times. I also hope to share it with my 38 year old son who has some kind of parasite infestation (or symptoms imitating one). He’s had crawling/biting sensations under his scalp for almost a year now and has been to numerous doctors who haven’t offered him any help or hope. He’s frustrated, depressed and angry at God. I’m hoping this study will encourage him and draw him back to the Fathers’s arms.

Love this excerpt. I look forward to this study. Thank you for being open, honest and vulnerable.

Oh, my goodness! I had no idea! You went to Lake Brantley at the same time my sister did (I went to Lyman)! Your open transparency is refreshing. I can’t wait to read “Job”. I honestly think it will help me understand so other issues I’ve dealt with.