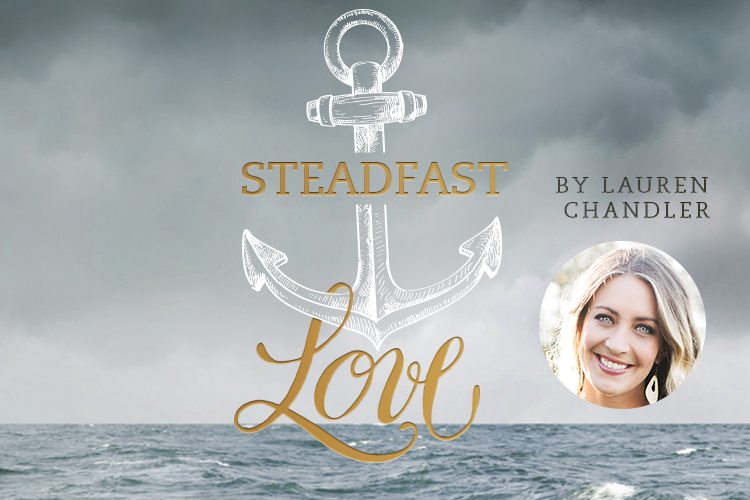 The following is an excerpt from Lauren Chandler’s new study, Steadfast Love. Order your copy or see a free sample today at LifeWay.com/SteadfastLove. You can also pick up a copy at your local LifeWay Store!

Although a well and an anchor have two different functions, both are sources. A well is a source of sustenance. It holds water—the most basic need of all humans. An anchor is a source of stability. It holds a vessel fast—keeping it from being swept away by various currents.

Seasons in the desert reveal our wells and anchors—the things in which we find sustenance and stability. To use churchy language, they expose our idols. God used a desert to show His people (the Hebrews) that they trusted more in their oppressors than in the Lord who freed them from oppression.

The Lord did what He said He would do. Pharaoh’s heart was hardened every time Moses and Aaron approached him concerning the Israelites. Signs and wonders accompanied their requests. Great acts of judgment came against all of Egypt. Ten plagues befell the nation—water turned to blood, frogs, gnats, flies, death of livestock, painful boils, hail, locusts, darkness, and the death of the firstborn. In the final plague, the Lord provided a way of protection for the Israelites. He gave specific instructions regarding what would become a sacred feast for centuries to come (and foreshadow Christ’s sacrifice on the cross) called the Passover.

A young, blemish-free lamb was to be killed, its blood painted on the doorposts of their home, its flesh roasted and eaten by the household. Whatever was left over was to be burned. The Lord would pass through the land striking the firstborn of men and beasts but pass over any home painted with the blood. A great mourning broke forth in the land when those not covered by the blood woke to the death of their loved ones. Pharaoh and the Egyptians finally had had enough. They sent the Israelites out of the land in haste. The Lord led them out by way of the Red Sea and the wilderness (or desert) with a pillar of cloud by day and a pillar of fire by night.

Fickle Pharaoh changed his mind about letting them go. He realized the impact his decision would have on Egypt’s economy. Not to mention his pride was a bit bruised. Egypt’s military might led by Pharaoh himself pursued God’s people. When the Israelites encountered the Red Sea ahead and the Egyptian army behind, they cried out to the Lord and Moses, why did you bring us out here to die? They continued, why didn’t you just leave us alone in Egypt? How quickly they changed their tune from, Lord deliver us from our oppression, to, let us go back to our lives in slavery! (Proof they were seeking comfort rather than the Comforter.)

Despite their complaining, the Lord parted the Red Sea and invited them to walk on His promise of deliverance. Once every Israelite man, woman, child, and beast stepped out of the dry sea bed, the waters folded back over Pharaoh and the Egyptians who were in hot pursuit.

This was just the beginning. The Lord had much work to do in delivering His people. You see, although the Israelites had been taken out of Egypt, Egypt needed to be taken out of them.

To give you some perspective, as of this moment, the United States is only 240 years into its nationhood. Generations upon generations of Israelites had called Egypt home. They may have held onto the hope that they would one day be brought out to the land the Lord swore to their forefathers, but Egypt was all they knew. Weaning them from the wells and anchors of Egypt was going to take some time. So, God chose the desert to do so.

Before the wilderness/desert, the Israelites had only a vague idea of who God was. Most likely, they looked at Egypt’s gods (nearly fifteen hundred of them) to get an idea of who their God might be. The Egyptian gods took the form of every created being—human, animal, or a hybrid of the two. The Lexham Bible Dictionary tells us, “it appears that belief in the divine was in some way geared toward gaining control over the natural world as well as protection from dangers within it.” Thus, worshipers would give presents, build shelters, and make sacrifices to appease the deities. They would do their part and the god would do his. Worship was transactional.

Perhaps the Israelites thought this must be how the Lord, Yahweh, operated. They would do their part to appease the Lord so that they could get what they really wanted—prosperity, progeny, and protection. In His kindness, the Lord obliterated their skewed perception of Yahweh and revealed the broken wells and false anchors in their hearts. The desert proved the Israelites wanted what the Lord could give them more than they wanted Him.

Jeremiah 17:9 says, “The heart is deceitful above all things, and desperately sick; who can understand it?” We may think we know our hearts, but according to Jeremiah, they’re tricky. Israel may have thought they were doing just fine; all they needed was to shake off the yoke of Egypt. The Lord, who “searches all hearts and understands every plan and thought” (1 Chron. 28:9), knew better. He knows us better too.

We are not unlike Israel. We have notions of who God is that are skewed at best and false at worst. The desert season reveals our broken wells and false anchors—sources of perceived sustenance and stability. He dries up our wells and lets our anchors crumble. He lets us long. He lets us be hungry and thirsty and find no satisfaction in anything but Him.

Don’t miss Deuteronomy 8:5. The Lord God disciplines His children like a man disciplines his son—out of love and for our good.

Another term used in the Bible for well is cistern. The Book of Jeremiah is replete with references to cisterns. They were man-made wells hewn deeply into stone to hold water. When they became defective or useless, they were converted into tombs, torture chambers, and prisons. Jeremiah spoke this against God’s people:

… for my people have committed two evils: they have forsaken me, the fountain of living waters, and hewed out cisterns for themselves, broken cisterns that can hold no water.

Our broken wells will become our prisons. They will dry up, and we’ll be left at the bottom trying to figure out how to escape. Our false anchors will fail. We will be swept out to sea—prisoners to the current.

In His steadfast love, the Lord leads us into the desert, the wilderness, to free us from our faulty wells and anchors. He exposes the desires of our hearts so that we can see them for what they really are. He shows us that we seek comfort more than the Comforter, water for the moment rather than a Fountain whose waters never fail.

We’ll be doing Steadfast Love this summer as an Online Bible Study! We’d love to have you join us. Sign up to participate here.

If you’d like to memorize Psalm 107 with us, we’re also doing a fun Scripture memory challenge tied to Steadfast Love. You can find out more about that here.

Hi, Lauren. A group of ladies from my church just started Steadfast Love. We live on Dauphin Island, Al, and were struck by the beautiful setting for video! It looks so much like our little island paradise. Would you mind sharing where the video was filmed? Thanks, Sabrina Green, Church of the Island

Hi Sabrina,
Thanks for reaching out! This video was actually shot on 30A in Rosemary Beach, Florida.

Hi Tish! You can purchase or rent the videos at LifeWay.com/SteadfastLove

Just wanted to share a though with you Lauren..
You are a very sweet person with an obvious sincerity in your spririt.
In session 4 of Steadfast Love she mentions not being a Debbie Downer multiple times.

This I know may seem to be trivial to point out. I believe that she could address her point without using this praticular verbage. Yes, my name is Debbie so you may think this is a sore spot for me. In all honesy I don’t take is personal at all. I just think where Debbie is such a common name, there may be new Christians listening, how would they take this from her teaching. After all she is in the internet for the world to hear.
Just wanted to share this advice in love. She is a beautiful girl with a beautiful spirit for the Lord, will look forward to Lauren’s teaching in the future as well.
your sister in Christ.

I am familiar with the term “Debbie Downer” due to a popular TV show skit that has airs for years. My guess is that she just used a fun, vernacular term to describe the person’s attitude.

Hi, I’m enjoying the study! When does Video #2 come out?

It’s out! Here’s the link. A new session is out every Wednesday!

I signed up for the free online Steadfast Love bible study but i still haven’t received my welcome letter. Please help me

I SCRAPED TOGETHER MONET TO DO YOUR BIBLE STUDY GOSPEL OF MARK . I ALSO DID ESTHER ON LINE. And I eant very much to do Steadfast love but I just can not afford the study book and the videos so I csn folloy along. I am 72 and pretty much stuck in my apt. 24/7 also on a very fixed income. It is all i can do right now to get my meds and try to keep foid in my house.
Sorry I am not going to be able to do any more bible studys.
Yours in his name
Shelia Johnson
asheliaj70@gmail.com

Hi Shelia! For Steadfast Love, you’ll just need the Bible study book. The videos will be available for free online!