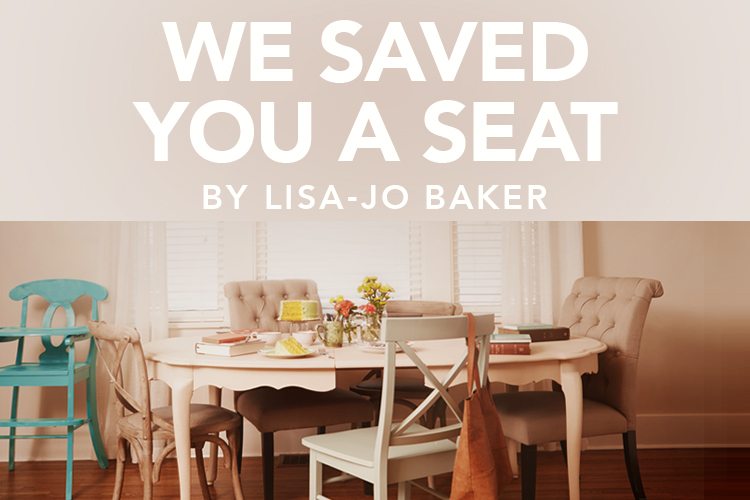 The following is an excerpt from Lisa-Jo Baker’s new study, We Saved You A Seat. Order your copy or see a free sample today at LifeWay.com/WeSavedYouASeat. You can also pick up a copy at your local LifeWay Store!

If you ask people how they’re doing these days you’ll likely hear one of two responses: “I’m fine” or “I’m so busy.” We live in a world where politeness trumps honesty and productivity trumps rest. So the last thing anyone expects to hear in response to the question, “How are you?” is the truth. Because some days that might sound like, “I’m crazy excited about my new promotion,” “I’m so smitten with my new baby,” or “I’m enjoying a quiet afternoon off.”

But, there are other answers that are harder to share, so we tend to shove them deep down inside of us where they can’t slip out and shock anyone: I’m exhausted. I’m depressed. I don’t think I can stand being a mom for another minute. I’m overwhelmed. I’m lonely. I’m still grieving. I’m maxed out, or I’m about to lose my mind. It feels awkward to interrupt someone else’s day by shoving onto them the unexpected baggage of how we’re actually doing. It feels like an inconvenience. An interruption.

An imposition on their time.

So we get really good about faking fine and keeping our baggage tucked neatly away so that it doesn’t spill over into the lives and afternoons of the people around us. That would be embarrassing and awkward because what happens when you tell someone how you’re really doing and they don’t have time for it?

If there’s one thing that defined Jesus’ time on earth it was His willingness to be interrupted. And not just that there were constant interruptions (and good grief there were a ridiculous amount of those!), what’s so striking is how instead of being annoyed by them, He welcomed them (see Matt. 8–10; 19).

Jesus stopped every single time. He allowed Himself to be interrupted, detoured, and inconvenienced. It’s never the perfect time and never in a perfect setting. This is eye-opening for me—the woman intimidated by Pinterest® who has been known to shove dirty dishes into the microwave and/or hide in the bedroom when unexpected visitors stop by—because by Sunday afternoons our house often looks like a circus passed through with every surface covered in teetering stacks of dishes or piles of laundry, and shoes, swimsuits, socks, pens, and pencils flung every which way around the front door and in a chaotic trail down the hall.

If I’m being super forthcoming, I’ve even sweated the planned visits. I admit I like the perfectly-planned setting, food, kid behavior, and a visit that has a set start and end time. For years I would have described myself as a “reluctant renter.” We were married 17 years before we bought our first house. And one of our longest rentals was small, grubby, and had faux bricks that constantly fell off the kitchen walls and carpets that, well, let’s just say back then we had three kids under the age of five and leave the rest up to your imagination.

For years my small, terribly imperfect house stunted my hospitality.

But the thing is, being willing to be interrupted isn’t about the state of our houses. It’s about the state of our hearts. Women aren’t hungry for perfection; they’re hungry for connection. One of the ways our world of the fast and furious Internet hurts us is that so often our schedules and attention spans don’t have enough time to give each other uninterrupted hours of conversation. But we will starve on a diet of conversations limited to 140 character tweets, text messages, or Facebook quips. We need soul food conversations. The kind that don’t cut you off because they have another appointment to run to. The kind that lingers.

I remember it with a knot in my stomach. It was a night when I was tired and our kids were being wild and unruly after a late night church event. All I wanted was to wrangle everyone back into the minivan, to home, and to bed. I wanted my shoes off, my hair down, and my comfy pants on. And as I was crossing through the church hall, I kept my eyes down so that I wouldn’t have to stumble into conversation with anyone.

I wove my way through the chairs trying to get to my kids and spotted one of my Tuesday night Bible study girls with her back to me and her hand on her cane. Without even giving it a second thought I backtracked around her so that I wouldn’t have to pause to talk. So that I wouldn’t have to give up a second of my time to a friend who lived by herself in a small room with her cats and her passion for beautiful, colorful necklaces and who came out every Tuesday night because she was so hungry for company.

Just a few weeks later she had a stroke that she never recovered from. She died before there was a chance for any more nights together. It was a small, invisible moment that she didn’t even know I stole from her, but steal it I did. And it was the last time I saw her alive. I only saw her back because my tired, selfish heart avoided a friend when it should have given the gift of its own time and presence. I know better. And I have to live with that memory. Time is a gift that doesn’t even belong to me, but it was gifted by God, who spoke hours and minutes into being the moment He set the sun and the moon in the sky.

I stood at her memorial service though, and I got to bear witness to the generous way she had spent her life. I got to hear from person after person about how she’d poured herself into each one of them. We laughed, cried, and sang our hearts out in memory of a woman who was quirky and beloved, and I loved her too. She wasn’t perfect—and she knew I wasn’t either—but now I get to carry her in my heart where she reminds me that giving people our time is an act of radical generosity. It’s countercultural to refuse to utter those three words we say without even thinking, “I’m too busy.” I don’t want to be too busy. I don’t want to be hung up on whether my house is presentable or not. I want to be available.

I want to be willing to be interrupted. Period.

Thank you, for the confirmation that I’m sensing… to take time and use it wisely with what is really important in life. People… and their life story, while acknowledging my own journey. Lord, help me to realise the opportunities for soul feeding. Amen.

We loved chatting with @michaeltgibson on the late